Paul Radu talks about the Investigative Dashboard, an online resource he co-developed to fill a gap in cross-border information access about companies, corrupt practices and the groups and individuals that run the organised crime 'sector'.

To investigate corporate corruption, journalists must follow obscure paper trails through several countries. This kind of research requires time, money and foreign language skills that are often out of reach. So Paul and his team built the Investigative Dashboard, a revolutionary online service that helps journalists navigate foreign business records and connect the dots.

Your tool, the Investigative Dashboard, helps people to investigate corporate records across borders. How does it work?

I’ve taught and investigated in many countries. One of the main problems for journalists in quite a few African countries, for example, is that they do not have access to information, especially cross-border information. There are several barriers that prevent people from following the money. You have to be able to access company records; this is hard sometimes, because (for example) most of the big businesses that operate in Sierra Leone are subsidiaries of foreign companies. In order to track these foreign companies, you would need to search databases abroad. For example, if there is a Ukrainian company operating in Sierra Leone, you’d have to look at the Registry of Companies in Ukraine.

This means you need to be able to understand Ukrainian. It also means you need to have money to buy the records. These are hurdles that some journalists cannot jump: the lack of foreign language skills and the lack of money. This is why we set up the , which gives people an entry point into ways of following the money. We created an elastic list, an index of company databases from all over the world. You pick the country that you are interested in, and you start there. We’ve also attached a few video tutorials explaining how to use these databases even if they are in foreign languages.

This solves the problem of knowing where to go, but not the problems of language or money. This is why we established the other part of the Investigative Dashboard, which is a research desk, where we have researchers who know how to follow the money and how to obtain company records, online and off-line. A journalist who needs data can ask our researchers for help, assigning them a task, such as “I am a journalist from Liberia, and I want to know who's behind this company.” And the researchers would give him or her the name. The journalist could also ask for information about an individual: “I’ve heard that the President has some companies. Can you help identify them?” Our researchers then get back in touch with the journalists or activists who want the data, and we supply them with the relevant documents, if we are able to find them.\ We also realised there was a need to dig deeper into the research. So if someone says, “I need the records of a particular company based in Ukraine”, we can easily provide them with that company's records, but if we notice that the company in Ukraine is owned by another company in Cyprus, we go further and we obtain the records of the company in Cyprus.

If there are three directors of the company in Cyprus, we may also find out what other businesses they are involved in, by using other databases. So we try to give the journalists a lot more information than what they initially ask for, because this will help expose wrongdoing. With the Investigative Dashboard, we offer an opportunity, so that journalists and activists can do the research themselves. And if they are not able to, they can ask us for assistance. That’s what the Investigative Dashboard does.

How many people have actually been using the Investigative Dashboard?

We haven’t advertised it much, but we’ve had about 500 requests from journalists in a year and a half, and we were able to supply them with data. The requests came from all over the world – some small cases and some bigger. We have recently assisted a TV station in Sweden, which exposed some shady businesses that were run by TeliaSonera, one of the main Swedish telecom companies, in the former Soviet Union. As a result of that, the CEO had to step down recently. We helped Egyptian journalists track down the money of the former regime, and as a result of that, some assets were frozen and court cases took place.

We helped Brazilian journalists investigate the director of Casa de Moya, the money-printing house there. He owned some off-shore companies and was using companies in the USA, and that investigation led to his resignation. There are lots of examples of the usefulness of the Investigative Dashboard. We are now going to announce it publicly and we believe our user base will grow. The problem is – or was – that we started this with very little money and very little research capability: two researchers. Even these almost 500 requests were a heavy burden on their shoulders.

Some of these requests were simple: people asked, “Can you get me this company record from Cyprus?” That’s easy, we can get it in a few minutes. Others are more complex; for example, if you want a company record from the British Virgin Islands, you have to call a lawyer there, and pay for the information, so it’s a bit more complicated. Sometimes the records we need are not online, or not in one of our databases. Then we ask journalist contacts in the country or countries concerned to go to the registry of companies and physically get hold of the off-line data from there, to scan it and send it to us. Things don’t always go smoothly; not everything is online. Often, the off-line information is more useful.

You have been working on a tool called Visual Investigative Scenarios: what is it, and what is it good for?

As we were working on “follow the money” stories, we realised that sometimes our reporting and narratives were too heavy, too complex for the public. It is inevitably complicated to express yourself in a narrative form when you have to talk about hundreds of companies, and about networks in many countries. It is hard for the public to relate to all this information, because your story is going to resemble a prosecutor’s indictment, which can be boring to read.

For this reason, we’ve created a new tool that we’re going to launch in June of 2013, the Visual Investigative Scenarios or VIS. Vis also means “dream” in Romanian. This tool will enable people to represent the information visually, thus simplifying their message so that the narrative will only contain the main story and its most important repercussions, with the rest of the supporting information in the visuals: the multiple connections, the different companies and so on.

We’ve been using info-graphics and visualisations a lot at and OCCRP lately, and we’ve realised they are very effective tools. For example, we were contacted by some Austrian reporters because they had seen a name that interested them in an infographic attached to one of our reports that was written in Romanian. Visuals can transmit a message across borders and break the language barrier, and this is very important to us because we want our investigations to be understood by everyone, no matter where they are from. What we are visualising are businesses, after all, and business is a common language across the globe.

The Visual Investigative Scenarios has an extra layer that we hope is going to help investigators even more: a cloud function. For instance, if I am visually representing an entity from Romania, a company that is connected to three people, and if the same VIS system is used by a journalist in Peru who represents something else visually, and the same entity crops up in both reports, there will be an option to merge or link the two. Say you have a company that operates in several countries, and separate investigative reporters are independently tracking down the money and profiling this company. The moment these two visualisations go into the system, the reporters will be offered the option to merge this correlation, and map organised crime connections more extensively. 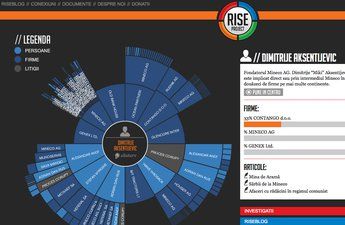 The most important thing is that you’ll be able to export the visualisation into a website, which will lead you to the narrative, extra documents and sometimes even videos. This is layered investigative reporting. It starts with the visual layer, where you have the infographics, as in the case of the Aliyev family. Some people will just look at this layer and they’ll understand the story, at least superficially. Some people will go a little further. They are going to read the narrative to find out more about this, wondering exactly how and why the President of Azerbaijan is linked to that gold field.

A third group of people are going to be even more interested; they will want to check the supporting documents to make sure that this story really is as we say it is. Some of these people are going to carry on to the deepest layer, which is, “how do I replicate this kind of work myself?” This layer involves video tutorials, access to databases, and the Investigative Dashboard. Maybe they want to visualise some information of their own. They might be inspired to search for the politicians of their own country in the Panama database that was created by our hacker, and then they may want to make visualisations using the Visual Investigative Scenarios. All these efforts are integrated, but the information is available in layers.