Information is Our Currency

Paul Radu about how a small group of investigative reporters can outperform a major law enforcement agency.

Can a small group of individuals outperform a major law enforcement agency? Paul thinks so. Where police are limited by national borders and diplomatic restrictions, the individual investigator works freely across countries and continents. In the digital era, this flexibility makes people the most powerful force for change.

What is the difference between what you are doing and the work of other agencies whose job it is to expose the lack of transparency and accountability of organisations and individuals?

Law enforcement agencies, that should be fighting organised crime and corruption across borders, are national institutions. Their work usually stops at the borders of their country, and they do not cooperate well across borders. For instance, if the prosecution in Romania wants to cooperate with Panama and get some records from them, it is going to take at least a year to get a set of records. They have to establish a derogatory commission and go through diplomatic channels; this takes a lot of time. What’s more, even when a request from a Romanian prosecutor reaches the desk of a prosecutor in Panama City, it is likely that the Panamanian prosecutor has other things to do that are much more pressing. 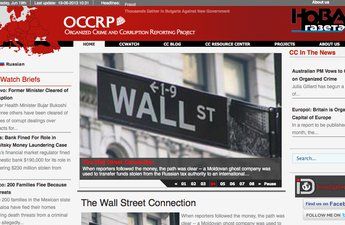 So that request from the Romanian prosecutor will go to the bottom of a big pile of papers and take a long, long time to resolve. Organised crime doesn’t work like that. These people work fast, they move across borders very well and they don’t care about language, religion or social conflicts. They take advantage of all of these things, and they make money. Take the example of an organised crime group that operates in the United States and in Iran: do you see law enforcement in the US cooperating with law enforcement in Iran? I don’t think so. But for organised crime, for criminals from Iran and the US, it is very easy to cooperate.\ \ This is what makes us different, the fact that we operate with the same kind of speed as organised crime does. In a way, we are replicating their models. We do not have their money, we do not have their tools, but we are trying to replicate what they are doing. We try to create our own cross-border networks, and our currency is information. Their currency is real money or virtual money, but for us, the currency is information – and we are able to take them down because we are so quick.

Do you think law enforcement agencies could be inspired by the way your network of investigative reporters operates?

We meet prosecutors sometimes, at conferences for instance, and they are always amazed by the fact that we can get companies’ records from in a few seconds, that it is so easy. Now what we are trying to do is to give these tools to the public and to law enforcement agencies as well, because these tools are available, are open to anyone. Of course, they are available to organised crime as well. And the prosecutors, when they see this, think, “Wow, this is so cool”. Of course, they wouldn’t be able to use this information in court, but it would help in the initial stages of their investigation, because they’d know where to look for information. Instead of asking that prosecutor in Panama, “Hey, can you check whether this guy has any companies in Panama?”, they could actually pinpoint: “I need the record for this particular company”, which would make things much quicker. Right now, they don’t work this way, they continue to think in the old way.

One of the other big problems is that law enforcement always stops at borders. The agencies have national interests, they respond to the mayor of the city, to the president, to the government, and those people want quick results, they want a particular problem to be solved right now. They are happy if they bust a cocaine shipment, and that is “the big case”. But at the same time, money continues to flow across the region from trafficking people, from trafficking drugs, from other crimes. It flows freely because the law enforcement agencies don’t have the capacity to investigate and they don’t have an overview – they don’t see the whole picture. Occasionally they bust bits of the networks, but that is not enough because if you imprison the smaller members of the network, the network will still survive and flourish without those people.

What is the ratio between what you actually know about a particular story and what you end up publishing?

What goes to the public is the information that is based on solid evidence. We only provide the public with information that is very well-supported, because when you are investigating the powerful and the corrupt there are a lot of interests at work. We always focus on the hard evidence available in documents, but when we publish the story we also add visual elements and usually these visualisations contain more than the text of the story does. For instance, if we reveal that a particular person was involved in a specific corrupt deal, then in the text we just include a sentence stating this, but in the visualisation we include all the other companies that this person has set up, his or her associates, and so on. We use the visualisation to provide additional information, without making any assumptions. The data we include are all from the public domain; we put them into our visual representations because we’ve investigated all of these details.

The main message of our stories is in the text, the visuals are is just providing support for that primary message. But sometimes, and this is one of the problems with investigative reporting, you end up using very little of the information that you have found. We want to make use of more of what we know, which is why we create visualisations of everything for which we have solid proof. Sometimes, we get lots of proof and only use a little bit of it in the written story, but other people who see your visualisation can find value in those additional facts. Information has different values for different people.

Do people from other countries use your visualisations?

Just last year, we published a story about Bashar al-Assad, the ruler of Syria, and his investments here in Romania, in Austria, and elsewhere. We also created a visual representation of the companies in which his close associates had interests. That information was not very important to us in our Romanian environment, but it turned out that for the Austrians, it was very important. So, ORF, the Austrian public TV station, contacted us and said, “Look, we’d like to know more about this, because these are companies that are active in Austria”. Information that relates to a particular location can mean a lot in different geographical contexts. This is something that we play with a lot. In a way, it’s crowdsourcing, but it is not directed. We’re putting facts out, making them available.

How important is it for you to give your readers access not only to the investigations that you publish, but also to all the materials and documentation that you have gathered?

At Rise, we experiment a lot and try to find new ways to represent investigative reporting. We are creating long-term stories, they can last for a long time without losing value, because they are based on in-depth research. We always attach small databases or visualisations to our stories, indexing the entities that are mentioned, because we want readers to have as many entry points to the investigative story as possible. 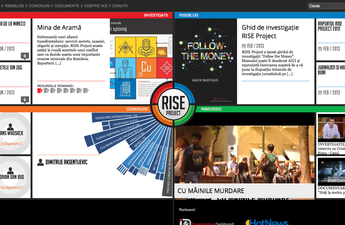 Of course, one of the best entry points right now is search engines. People are going to use search engines to look up entities, names, companies’ names, etc. This is why we not only index all of the names in our investigations, we also visualise them. For instance, at the Rise Project, we use a form of visualisation that maps individuals, companies, and litigations. Just including the data about these three types of entities actually adds an extra layer of information, and we can attach a description to each of these entities that is not in the story itself. We do not want to burden the written story with so much extra information, but if people are interested in knowing more about these individuals, these companies, or these court cases, they can find out here, and this is another entry point.

The Rise Project visuals get many hits. Some of these visuals also contain entry points to facsimiles of the real documents that we get from the sources. We play with the idea of “visualising everything”, so each of the investigations on the Rise Project website is accompanied by these dynamic visualisations.

Sometimes we get a surprise, because when we map a new character that we’ve encountered in our investigations, and all the companies that this person owns, suddenly we see that these graphics merge with our previous graphics, because the same company is involved with other people or litigations that we’ve reported on.

This is very helpful, because you can’t possibly keep all the entities in your head. What we include in our visualisations is not just what is in the story: we include company names that we haven’t mentioned because we don’t want to make the story too heavy. More often than not, those companies connect to something else later on. This is a kind of archiving exercise, too, a way for us to keep tabs on what is going on; we call it a visual archive.