An interview with James Bridle in conjunction with his work "Seamless Transitions."

James Bridle is a writer, artist and technologist from London currently living in Athens. Seamless Transitions is a portrait of the architecture underneath the UK immigration system. James talks about using online tools to uncover information that was publicly available but not yet utilised and how he used this information to create imagery of these invisible and hidden spaces.

The investigation that you've recently finished on the detention system in the UK put you in the position of documentarist and even a witness at the airport. The investigation is also about the notion of citizenship and migration. How did you move onto this work? It’s slightly different than your previous work for two reasons. Firstly you are on the ground, taking on an investigation which is more common for investigative journalists or activists and secondly, you took the entire analysis from the ground and brought it into the digital and presented the entire portfolio. Those working in these issues in the field were surprised that you were able to do that. How did this happen?

The project that culminated in the work called ‘Seamless Transitions’, and a body of research that emerged around it, started very simply with me reading a newspaper report. A lot of my work has been about what tools we now have access to, crucially tools that we all have access to, things that are open on the internet, that were once really the preserve of very dedicated investigative journalists or were just simply not accessible at all before. One of which, my favourite one, is the ability to track aeroplanes in real time. I was reading a report in the newspaper about a deportation, about someone in the UK who'd overstayed their visa and was deported, and there were these strange details of the story that caught my eye. It turns out that the story, in fact, if you start reading stories about immigration, is not that unusual. But it was someone who'd overstayed their visa and they were being deported, and in order to get them out of the country because they were proving to be a political nuisance, they were actually placed aboard a private jet, the kind of thing that usually flies celebrities and footballers around, and rushed out of the country.

It only became news because the flight was refused entry to Nigerian airspace, where it was headed and went on this kind of insane 24-hour journey around Europe. But the reports I was reading about it seemed very slim and I realised that all the tools that I use every day could tell me more about this story. So I started digging into it and I looked through these flight records, which are very easily accessible on the internet. I looked at the websites of plane spotters. These things which aren't traditionally the tools of investigative journalism but are now really just there on peoples webpages, for anyone to look at. Putting those together, I built a kind of history of this flight and I published that information because it was interesting to me and potentially to others.

It was particularly interesting to activists on the ground who'd been looking at this system but weren't necessarily familiar with the tools that I was using to investigate it. In particular, their interest in which companies were providing the airplanes for this system to be in place. The UK government switched to using private charter planes rather than public planes because of the adverse publicity of at least one death and a number of other unpleasant incidents on normal transport airlines. They started doing it in the middle of the night on charter airlines. In order to get information to put pressure on companies to stop providing that service, activist companies were gathering details of the planes. One of them got in touch with me and was like, ‘Well, thank you for that. This one’s happening again, next week. In fact, the same guy is being deported with a number of others this time and it's happening next Wednesday. Can you tell us what the airline was?’ And I was like, ‘Well, no I can't’. Because I can't see into the future in that sense. I can only watch as these things happen. Except I realise that actually I'd gathered enough information at this point to know where this flight was going to leave from.

So I went to the airport at 11 o'clock on a Tuesday night, and waited around and sure enough, bus-loads of people started turning up. It was a deeply strange and very unpleasant experience but, I'm sure, far more for them than for me. Watching people being bussed to an airport in the middle of the night, under heavy police guard through a private terminal in this totally closed-off area of the airport. It struck me then and it's stayed with me ever since that whatever anyone's position on immigration or migration is or their political position, watching that occur, watching people being loaded off buses and onto planes in the middle of the night, under the cover of darkness, there's something fundamentally wrong with this system. There's something amiss in our handling of it. If this is the way in which it’s done, it points to deeper problems within this system.

But because I was there, again I could take the tail number of the aircraft that I saw them getting onto, find another company that was involved in the system and feed that information back to the activists and also share the methods with them, so that they could see it. But it was also part of the wider project. One of the things that I've noticed and that a lot of my work turns up is making the invisible visible. It could happen in a number of ways and one of the simplest ways is simply providing images where they didn't exist before. This is a thing that's going on but you don't see pictures of it in the newspapers because it happens within this kind of protected sphere. It happens within private space. One of the prime things they do is that they privatise things so it's not the government’s responsibility to tell you about it and they don't have to provide images of it. I wanted to fill in the gaps in that imagery and effectively use the same way of thinking about technology as I'd used in the investigation to do image-making. So I worked with people who tend to do architectural visualisation, who worked with architects, who produce plans for buildings and nice luxury apartments, who are very adept at rendering and making images of initially, imaginary un-built spaces.

But we did investigative work to get the floor plans and the planning documents and the eye-witness accounts and what few photographs there were of these places from various times, in order to build full 3D models of them, so that we could then essentially do tours of them. And we did that, not just for the airport terminal that I visited, this private terminal at Stansted airport, but also for the detention centre, where many of those people were held, which is again kind of privately-run space. And also for a particular court room in the centre of London, which is used for particularly sensitive immigration trials that involve secret evidence, which is a new law. A recently passed law in the UK allows the security services to present information that's not shown to the defendant. Which is a complete and utter violation of the right to a fair trial. But what was interesting about it is, within this courtroom - which you can visit when they're not doing the secret bit and you can sketch but obviously not take photographs - you can see this kind of appearing in the architecture. You can see the curtained-off witness box and screened-off areas where the spooks sit and so on. So, you have this architecture that repeats itself and reveals the laws that have created it and that's what that wider project Seamless Transitions was about. It’s not essentially a portrait of the experiences of the immigrants, the people within the system themselves, as important and necessary as those stories are to tell. It's a portrait of the architecture that shows what's produced by these kind of legal and social pressures underneath it. 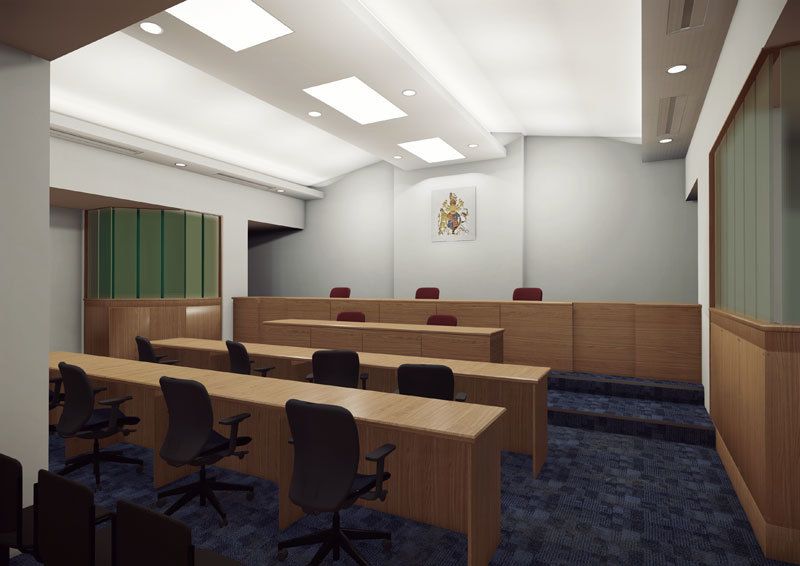 The court room by James Bridle and Picture Plane. See all images here.