Artist and investigator Mari Bastashevski about photography at the boundaries of secrecy.

Mari Bastashevski is an artist, researcher, writer, investigator. Her work blurs the line between these fields deliberately. She focuses on issues of systemic failure and international conflict profiteering and the information vacuum that surrounds these issues. In this interview Mari discusses using photography in her work and the process of rejection through enabling her subject to define their own perimeter of secrecy, whether legally established or imaginary.

From your work we know that you are gaining access to places that are difficult or impossible to gain access to. How does it work when you go through the process of requesting a photograph?

Usually, I would either request permission to take a photograph in advance via e-mail, or during an interview with a company or a governmental institution. Usually, the permission would then be denied. This is a fairly standard system of request and rejection, where I become the requester and they have the power to play a rejector. The rejection itself is very interesting and it varies from silence to an e-mail very diligently composed by a public relations executive. The latter is especially true of Western European companies.

What I try to do next is to ask them where exactly the photograph is rejected and where the border of rejection ends, defining the distance. For me, this is the disruptive element that forces the requester and the rejecter out of our established positions. It also allows ‘the photographed’ to draw their own perimeter of secrecy, be it legally established or imaginary. This element of the work is very much a performance. One in which both the photographer and the photographed stumble and look a bit surprised.

This specific approach was inspired by a Swiss defence contracts broker, BT International, whom I met back in 2011.

At the time, I located the companies office in a countryside-setting surrounded by a rural idyll and decided I might as well ring the bell straight away. The director, who was there alone, asked me to take off my shoes and invited me in for tea. So we ended up sitting there drinking tea and we talked for a while. He answered some of my questions and he did not answer some of my other questions as he went into the traditional ideological discussion of, "Well, if we're not going to sell it, someone else will and there are bad guys," and all of these things that you hear over and over again. All the while I can see cows grazing, right outside the window, and remember how this very small company is responsible for brokering a lot of very serious deals around the world and I am trying to figure out how to compute the two. And when I asked him whether I could take a photograph he of course said “No” immediately explaining that I could only take a photograph from a legal distance outside the perimeter of the house," and that was the end of it so I put on my shoes and photographed the cows. 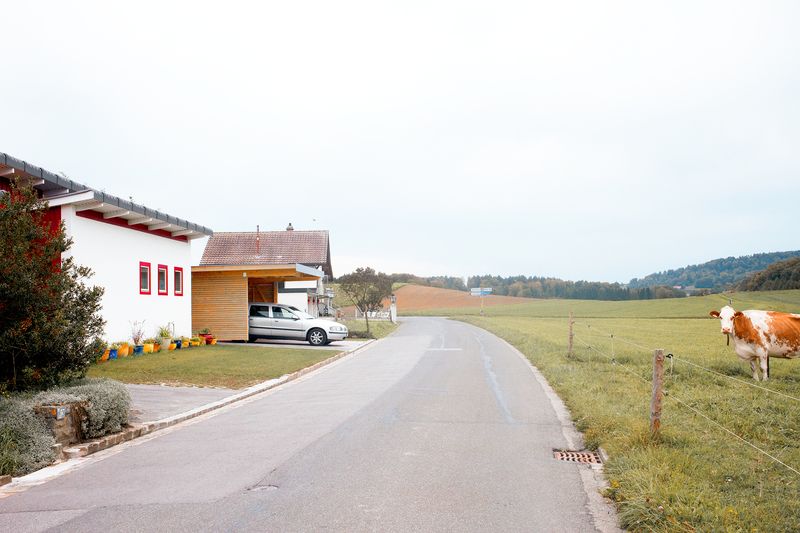 Do you arrange and frame the photographs when you take them? Do you work on the composition of your pictures? Or do you take them as they are just from different angles?

Aesthetic is interesting and this is a question that I have gotten in my practice before. The arrangement is present, but I am not sure that it is my arrangement. Rather, it is the arrangement courtesy of the industry or the state or the entities that I am photographing.