In this first interview with Mari, she talks about her practices and processes of her work which combines multiple fields to investigate corruption, abuses of power and systemic failures.

In this first interview with Mari, she talks about her practices and processes of her work which combines multiple fields to investigate corruption, abuses of power and systemic failures.

How would you introduce yourself?

I am Mari Bastashevski, an artist, researcher, photographer and investigator who deliberately blurs the lines between these fields in an attempt to challenge the existing channels of information delivery. I am based between Lausanne and Kyiv and I work worldwide on subjects concerning systemic failures, corruption, abuse of power by the state, as a result of the merger between state and commerce, that trade off of conflict commodities, from mercenaries to mass surveillance. In as much as the opaque justifications for secrecy under which these relationships wield power and profit.

People investigate for many different reasons, what are the goals of your investigation?

When I began to work on State Business, at first I was incredibly frustrated by the fact that I was not getting anything but template answers, but this lead to thinking about the value of negative research in terms of mapping the black spaces, locating the proverbial doors that could not be opened, curtains that could not be lifted. Today, for me the goal of finding the absolutely satisfactory answer – “the truth” – is secondary to finding out how information itself about certain aspects of power, such as veil of confidentiality, works.

You construct your investigation based on the limits of the stories on the fact that you are working with fragmented information. I'm curious how you see this negative space. Do you find yourself observing from the margin as there's no other way of directly getting the answer you are trying to get?

I think as constant consumers of the internet, we tend to hold as self-evident that, with Twitter and YouTube, every state secret and war crime has come undone and put on online for us to find, gift-wrapped, and that if we want to learn anything about anything, we just need to Google it and all the answers will come pouring in with a click of a button. Society of the Query Reader makes a few elaborate points about that. This illusion of the infinite possibility eclipses the fact that while a lot of it is open source, there is still so much underneath that surface, if you scratch it, which is just off limits to citizens.

Research is core to a solid investigation, how do you go about it?

At the same time, getting the best of your Google queries and mapping the initial work done by other researchers, filing various FOIAs (something Jason Leopold totally cornered the market on) … all of that feeds into formalising the specific questions that you are going to ask in that face-to-face interview. The interviews then inform the documents, and, whether you are parsing the documents you are looking at correctly. So as far as research methods go, combining them together in as many ways as possible, gives you a very good idea of how the information about certain issues transmits and forms narratives.

What is driving your curiosity? How do you choose the narratives or stories you focus on?

So far State Business consists of seven chapters, but I might change that. It is an ongoing project.

While picking out cases for “State Business” the first case study I became immediately interested in was a series of cargo flights, delivering weapons to both sides of Nagorno-Karabakh Conflict between Azerbaijan and Armenia simultaneously. It was something a friend and a colleague Simon Shuster first mentioned to me in passing. And the interesting element for me there was “simultaneously.”

What you learn from the government and industry insiders is that there are a lot fewer enemies amongst the power elite than the media would have you believe. The ideological pretensions, and restrictions that govern others do not usually apply to people who are at the very root of sustaining them in forms of ‘binary national threats’, and 'raised security concerns’.

A case in point inadvertently brilliantly illustrated by Verint Israel and Nice Systems (now Elbit) practices, who at behest of Israeli government, cut surveillance deals with Saudi Arabia and Bahrain. The Israeli engineers and consultants travel in secret, into the countries that no other citizens can go to. It is almost as if the Israeli surveillance industry has done more to establish dialogue with the Middle East than all of the international diplomatic efforts combined.

You've mentioned that much of your research is through interviews and interviewing sources, how do you find your sources?

I do not think you can ever know in advance who is going to make a great source. It’s a very broad range. In the course of any projects research phase, I would meet a very different cast of characters. People who are very proud of the way they manage PR crisises and want to brag about it. Or people who have something to gain from sharing someone else’s secrets. I also meet genuinely concerned sources who are part of the conflict industry and are trapped within it, or at least feel that they are trapped, especially in surveillance industry where many are engineers. Some would end up giving you answers as a way of proving you wrong, which I find really interesting.

A new sourcing issue that I’ve come into recently, while working as a commissioned researcher – and this is a paradox – is a set up where my access to information is tremendous, but I can only get this access by agreeing to non-disclosure. In a situation where I could be observing, say, a meeting where ten officials would make decisions about a future of a small country in Africa (something that could be of tremendous value to public domain) and surely would also help elsewhere in my research, but ethically I find this very conflicting and I’m yet to make up my mind as to how to proceed in these situations.

How do you go about gaining access to particular individuals, companies and institutions?

It varies so much. Sometimes you think "Okay, I'm just going to send them an official letter asking for a photograph and it will all go fine." As was the case with Siemens. But I got completely stonewalled. I was in for another kind of surprise with Ukrainian Export Department in Kyiv. I wrote them a letter. They let it linger long enough for me to think "Okay, at best I'm going to get an interview with someone, it's going to be a low level state official and they’ll never allow a photograph”. But they then invited me to the head office and there were fourteen of them: ex-military, ex-ministers in their late 50s, and the director himself. They all sat down in front of me at a round table and gave me a chair across from them. And for a moment there I lost my footing completely.

What's your most striking observation when talking to these people?

The overarching presence of banality might be the only repetitive element in all of my work. There is no secret, parallel underworld run by super-villains. And what I find most cynical about studying conflict-generated economies is that they rest on unspoken mutual agreements of fragmented responsibility in as much as they do on secrecy. Which are governed by people who frequently misspell things and send pictures of their food and kittens to each other, much like anyone else. This also becomes abundantly clear when you speak to everyone involved. The governmental institutions and companies are comprised of people. And more often than not these people will tell you ”Well, I am doing my job. Everything I do is legal. How is anything my fault” and that’s true. I could conclude most of my work with a “By the way, this is perfectly legal”.

How important is collaboration for you?

I find that working with different collectives, with hackers, with designers, curators, and scientists is actually beneficial for all of us.

The only communities that are still not entirely accepting of the crossover between professional fields are the artists’ communities, in photography especially. People would still come over to say, "This isn't really art. This is investigation." Or “How is this photography if I have to read so much text?” It’s ironic to encounter this grumpy sort of resistance from a place to which I would consider myself a local. It is easier with researchers. When I first came into the think-tank settings saying, "I'm an artist", people were a bit dumbfounded. Many would have still had this idea of an artist as someone who sits in the corner in dimmed light and strokes the canvas from time to time and of art as something you take up being a researcher, as a hobby. But then as we talked and collaborated and some time passed there was a natural acceptance.

I have recently started working with a Dutch designer collective, lust.nl, on visualising documents and the origin of the sources. We have this fluent synergy, you know, when you reach the perfect idea but you're not quite sure whose idea it was. As an author I still make the final decisions and assume the completely responsibility for the presentation of my work, but I learn so much from collaborating up until that point. 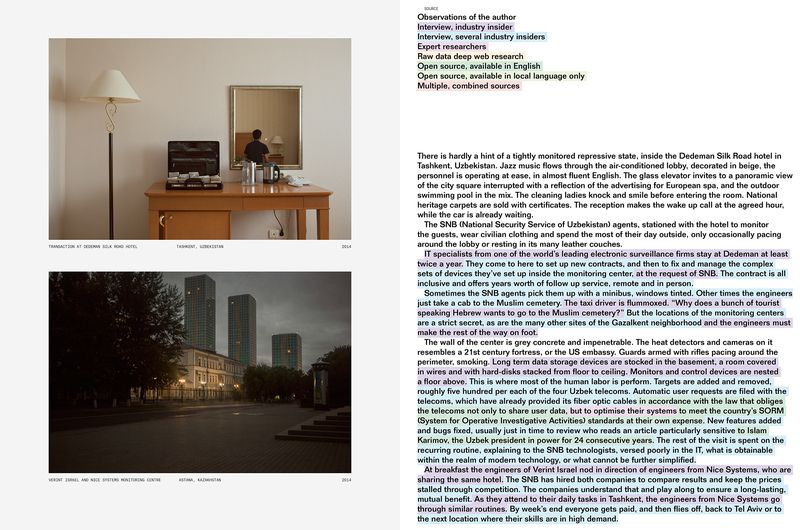 How do you find it to navigate these spaces as a woman?

I am going to disappoint you here, aside from the usual, mundane differences in social interactions when opposite sexes are involved, I have never really been able to answer the question of whether I lose or gain as a result of my gender, because frankly I have nothing to compare it to. I have no idea how it would have been for me to navigate these places as a man… More research needed!