James Bridle is a writer, artist and technologist from London currentlyliving in Athens. 'Five Eyes' was a four-month installation in theVictoria and Albert Museum in London that uses objects and archive filesfrom the V&A's collections to explore the nature of structural andinstitutional power.

James Bridle is a writer, artist and technologist from London currently living in Athens. 'Five Eyes' was a four-month installation in the Victoria and Albert Museum in London that uses objects and archive files from the V&A's collections to explore the nature of structural and institutional power. In this interview James talks about the installation and the Hyper-Stacks system that was built underneath it that offers viewers a new way to explore the millions of objects in the museum through finding connections and running analysis on the entire collection. Through using the Hyper-Stacks system James displayed five cabinets that tell a short story about the history of intelligence and how it shapes the world.

You recently created a system that was implemented in the exhibition at Victoria & Albert in London to explore and understand the system behind a large museum historical collection. Could you talk about your ‘Five Eyes’ project for someone who might not have had the chance to go to the London to see it?

‘Five Eyes’ is an installation in the Victoria and Albert Museum that came out of about six months of spending time at the museum, talking to people who work there, understanding its structure and its archives. Particularly the archives because I wanted to make visible the underlying information that brought the collection together. Also particularly, how stuff gets into a collection like that. It's a museum that is almost 150 years old. It’s got millions of objects in it and those objects are made special by being part of the collection. But they are also an incredible body of data. It's increasingly difficult to make art or have conversations about data that isn't about people's personal data, and so being able to use a collection of objects as that data is kind of a useful test base. But what I did was perform essentially a kind of surveillance on the objects in the collection. I looked at all the information about them and I correlated it and I analysed it through the same kind of techniques that the intelligence services use. By the end I had a network of connections, essentially the metadata of the objects, and I could ask it to explore. The software that I wrote for it explored the collection based on various stories. I used those stories to build a series of narratives through the objects about the history of intelligence.

The ‘Five Eyes’ of the title refers to the five English-speaking intelligence agencies who share information in the UK, the US, Canada, New Zealand and Australia. I told a little story about each of those. In terms of the Australian case, because each one was its own case within the museum full of objects, I was interested in contemporary Australian issues around immigration and intelligence's role in that. So I looked at the history of migration through the V&A's objects and what I found was, for example, a pair of incredibly ornate and beautiful boomerangs, which everyone associates as being an Australian object. But these in fact came from India, where the boomerang originates. Or a pair of nutcrackers - because this is a design museum so it's full of these kind of objects - that were used on steam ships that used to take European immigrants to Australia. All of this was done by the software that I wrote. It went and found these connections based on texts that I gave it. But I could also work with it as well.

So in part, the project is about how data defines the set of objects, but behind that there were always choices that I made as well. Some of those choices produced kind of difficult objects, and there came the question of who has the agency within this system. Is it the software acting autonomously or is there always in fact a human intelligence, however obscured, behind it? 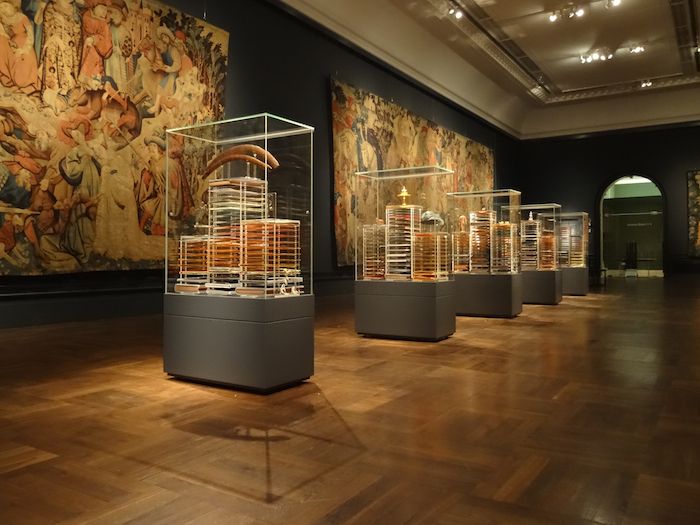 The V&A has its own database interface however you only often get a very limited description of the object. There is not even a photograph. You have created a system for exploration of these somehow explorable corners of one of the vastest collections of objects. How important was it for you to expose this hidden world of classification, documentation and cataloging?

So there are two parts to the installation. There's Five Eyes, which is the installation in the gallery itself, and then there's the Hyper-Stack system which built it, which anyone can explore online, which is built on top of the Victoria and Albert's own open data systems. But for the installation, I wanted to do something that really visualised the amount of information that underlies every single object. So every object is presented with its own data cloud effectively, alongside the metadata of other objects, in the form of the archived files. So every object in the museum has a corresponding file. And so, if you want to present a hundred objects together, you can present them represented by these files to show the networks. For me, that makes visible the stacks of information underlying every single one of these objects and choices that are being made that aren't always visible when you just go and see particular objects. 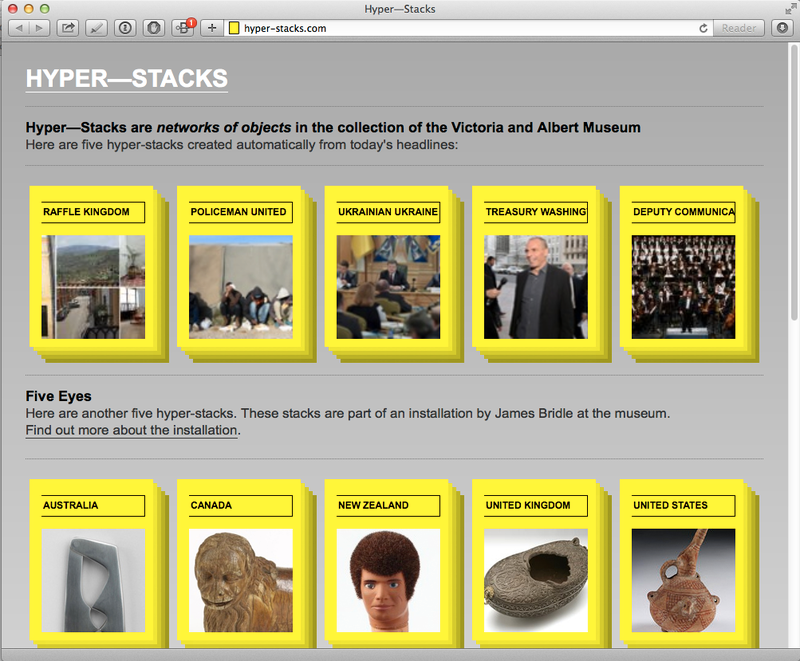 A screenshot taken by James Bridle of the Hyper-Stacks website.

The Hyper-Stack system is both a kind of ‘outside-in’ position on the museum and also something that's kind of produced by the way it creates things as well. What I like about it is that it does always cut both ways. The objects in the institution are incredibly fascinating and valuable and do always come with stories attached to them. The converse is that you can tell those stories in many, many different ways, and really the agency is within the storytelling rather than within the objects themselves. You can also use either side to kind of explain the other one. So you can use the structures of the museum to explain something apparently vaster and more complex like the intelligence networks, but you can also use how people are starting to understand intelligent networks and computer systems to explain the politics of the museum, which is an important step in understanding the politics of any kind of state institution.

Why did you choose to call the system that is driving the narrative behind the objects Hyper-Stacks?

The term Hyper-Stacks really originally comes from the term hyper-object, which is used in a number of ways. Timothy Morton, who was one of the people who coined it, used it to describe concepts that are essentially too large for individuals to deal with on their own. So it was used as a term to talk about climate change, for example. Something that's so vast and so complex, it's incredibly difficult for single humans as individuals not just to deal with it, but in fact to really grasp its implications as a whole. I think it's a useful phrase, because it implies the vastness and complexity that we can understand exists, but actually struggle individually to comprehend. We're building systems that attempt to model that in some way. But most of our systems are incomplete, because they attempt to capture such systems, and explain them fully, rather than simply giving us the terms and critical possibilities of engaging with it, that allow us to deal with such subjects without getting completely overwhelmed by them.