Through his project Citizen Ex James questions thecurrent notion of citizenship and instead proposes a new form ofcitizenship, Algorithmic Citizenship, one that can change each time youaccess a new website.

James Bridle is a writer, artist and technologist from London currently living in Athens. Through his project Citizen Ex James questions the current notion of citizenship and instead proposes a new form of citizenship, _Algorithmic Citizenship,_one that can change each time you access a new website.

You made ‘Citizen Ex’, a project that was part of The Web We Want Foundation. It’s a browser plug-in that allows you to see which servers you are connecting to in which countries and on the basis of this, it assigns you citizenship. Why did you want to explore the idea of digital citizenship based on internet usage?

I've been really interested in citizenship for a while. I've been particularly investigating the UK laws around when one can have their citizenship revoked. For millions of people who've chosen or been forced to become migrants or who are stateless, citizenship has always been something that's very unstable and uncertain. But for most of us, our citizenship is something that we essentially take for granted, and we take a lot of the protections that come with it for granted as well. But in fact, there are various laws, in particular in the UK, which mean that citizenship can be revoked. And when you realise that, you start to think about everything that flows from it, all the protections that we get because of our citizenship. I was looking for ways of representing this, but for a long time, I've also been interested in how you can use the physical structure of the internet, how you can look at where it appears, its architecture and infrastructure, to talk about the underlying politics of it. And to get more of a grasp on the kind of mistakes and the national and corporate interests that are also involved in it.

These two come together in ‘Citizen Ex’, which is a series of browser plug-ins for Chrome, Safari and Firefox. As you're browsing the web, you can pull up a map showing you where the website you're visiting is located, reasonably accurately. It's based on the registered location of these places, but it's pretty accurate. You start to see into the infrastructure of the web itself, you start to understand it as something that has a geography. Once you start to get those locations, then you can say ‘well, here are the countries in which these are hosted’. And those countries have different laws around data protection, and so on and so forth. So you start to build what I was calling an, ‘algorithmic citizenship’, where your citizenship is a percentage based on the different places you visit, so you may be 60% US, 20% British and 20% German. 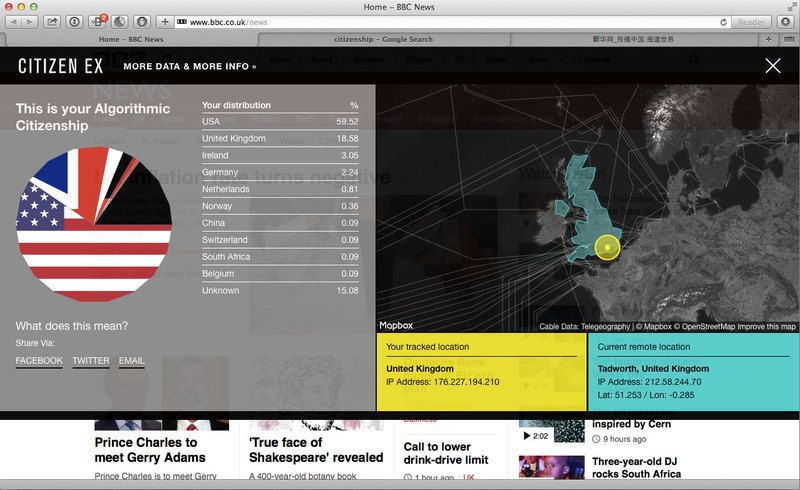 An example of the Citizen Ex application's calculation of someone's Algorithmic Citizenship based on where they go online.

This feels a bit like a science fiction thing that, 'oh, in the future, we'll all be on the network like this, and this will be how we think about things’. Except this is also something that's happening right now. It's something that we do ourselves, effectively, every time we use something like a VPN, to change our apparent location, so we can appear to be American so we can watch a YouTube video that's only located there for example. But it's also the way that surveillance is done. Among the NSA documents released by Edward Snowden, there's a description of how the NSA, and subsequently, other security agencies, including GCHQ, the British one, assign citizenship to people they're surveilling. That's actually all of us, because they're tapping all data, in order to decide who they surveil and which nation is responsible for their surveillance. They look at browsing data and that kind of information to assign people a citizenship. That means that fundamental rights around the right to privacy and the right to freedom of expression are being created by this algorithmic citizenship right now. So my representation of it, through ‘Citizen Ex’ is a fairly simple, kind of explanatory one. But it's also related to something very real that's happening right now. And also potentially, to something that we might want to either disrupt or to encourage. There are other potential uses for this idea of different forms of citizenship that may be useful to us, and therefore we need to start having a conversation about them.

How does gaining citizenship usually work? Why and how are surveillance agencies trying to assess the citizenship of people they are trying to surveil and in terms of new forms of citizenship, what does the project bring to the conversation in regards to power and digital behaviour?

There are two main ways in which most people gain citizenship at birth, if they do, and they are, ‘jus soli’," and ‘jus sanguinis’. ‘Jus soli’ is the right to the soil. It means that wherever you're born, that's the citizenship that you get. That's actually what's current in most of the Americas, in North and South America. If you're born on that soil, you're a citizen of that place. ‘Jus sanguinis’, which holds sway in most of the rest of the world, is the right of blood. It's based on who your parents are, whether they hold the citizenship, or some kind of relationship to your family. These are the two main modes. The other ways you can acquire it are through various legal mechanisms depending on which country you're from. But ultimately it's a thing that, once you gain it, is supposed to be stable. Once you have it, it's based on where you are. And it's based on this chain of inference about location and family.

Algorithmic citizenship is different in a number of ways, because it can be split into various parts, so, you could hold multiple citizenships, but incrementally with different rights in different places. It can also be reassigned at any time, so it's not something that's in any way stable. As you behave differently, the levels of your citizenship could change. Those are the kinds of things that digitisation and computerisation can apply to values, essentially. They can keep them in constant motion which makes them incredibly unstable.

Now, that instability could be a useful thing; it could be a thing that you want to happen. It could also be a complete tool of oppression if it's something the parameters of which are not decided by us and not decided democratically but decided in secret, as they are decided today in effect by intelligence agencies. That's not a useful, open, democratic way of applying this. But increasingly, also, as people become more connected to places outside their nation state, they build these kind of affinity groups that may spread around the world. Many of us feel that we are citizens of something wider than our own nation state, that we are connected more closely to people with common interests or economic values wherever they may be in other parts of the world, and that some form of community should emerge from that which should perhaps be recognised.

To say today that you're a citizen of the internet is dangerous. It harks back to a utopianism about the internet which I shared. But to say it today basically means you're a citizen of Facebook or Google, or it’s a kind of corporate form of citizenship. But you can see how the idea of algorithmic citizenship that emerges from the digital could apply in useful ways. Take the debate over Europe and the formation of the EU today. In the UK, where I'm from, we're currently having a major debate about whether to leave the EU. One of the debates around that is who gets to vote on that decision? Is it only UK citizens, or is it perhaps EU citizens who've lived in the country for a long time? Algorithmic citizenship may potentially be a way of extending suffrage to people with interest in particular areas in interesting ways. It may enable new forms of participatory democracy and proportional representation and other democratic systems like that, which are not always necessarily implemented as effectively as they could be. So, there's these potential benefits of different forms of citizenship and different ways of calculating it, but there'll only be benefits if we have the tools to discuss them and then the open debate that follows from that. 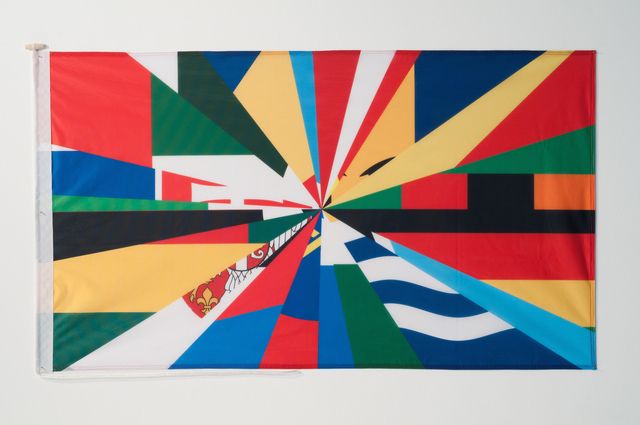 The Citizen Ex flag series are full scale (5' x 3') flags based on data from the Citizen Ex project by James Bridle.