The Investigative Commons was launched as a collaboration between the European Center for Constitutional and Human Rights (ECCHR), Forensic Architecture and FORENSIS in response to an era, in which facts and truth have become battlefields, and racist and nationalist tendencies occupy our discourse spaces.

This article provides a snapshot from Anne Schroeter’s* talk on “Investigative Commons: A new era of human rights investigations” at the Investigation is Collaboration conference organised by Exposing the Invisible Project on 2-6 August 2021.

Litigation against human rights violations is not always pursued by lawyers and human rights defenders because a case is likely to win in court. Sometimes it is about raising awareness, informing the public and giving people and communities a platform to bring issues forward. Legal cases of human rights violations are brought forward because victims and survivors deserve the same opportunity to present their case on equal grounds as their perpetrators in court.

Anne Schroeter from the European Center for Constitutional and Human Rights (ECCHR) says that governments and other entities with the authority and resources to collect evidence are increasingly the ones on trial for human rights violations, thus cannot be trusted to be an independent body. More needs to be done to ensure a balanced process of evidence collection as well as to increase public awareness on such issues.

While evidence of human rights violations is usually presented in court, such evidence can also be communicated and disseminated in other fora, including through public advocacy, media reports, as well as art and cultural projects. The aim is to deepen the public’s understanding and awareness of wrongdoings in the world through channels and formats that resonate with people across multiple contexts. Social change does not need to take place in a courtroom, it can take place at the ballot box, through an art exhibition, or a plethora of other avenues.

In 2021, an interdisciplinary collaborative effort to investigate and share evidence of human rights violations to wider audiences launched in Berlin as the Investigative Commons.Through collaborative investigations with like-minded journalists, investigators, reporters, artists, lawyers, activists, architects, scientists, and cultural institutions and their respective methodologies, the Investigative Commons strives towards accountability for human rights violations across multiple forums including courts, cultural institutions, citizens’ tribunals, and media platforms. Initiated by the ECCHR, Forensic Architecture and FORENSIS (a new NGO set up by Forensic Architecture in Berlin), Investigative Commons includes a range of other organizations like Haus der Kulturen der Welt, Mnemonic, Bellingcat, Laura Poitras/Praxis Films and it aims towards a growing network of individual practitioners, NGOs and cultural institutions to foster public discourse on human rights issues.

Investigative Commons is a testing ground for new methodologies. Projects are identified in areas where the partners and other collaborators overlap and could make the greatest impact when each organization’s methods are combined. Each investigation is unique by a combination of skills, creativity and expertise. For instance, inspiration was recently drawn from experts with backgrounds in machine learning, augmented reality, and gaming.

There are plans in the future for Investigative Commons to host residencies, and involve members of the human rights community for workshops and fireside talks to learn from their experiences in the field. The work carried out within this space may lead to litigation depending on the evidence collected. For now, Investigative Commons views all mediums as inherently and equally valuable in the pursuit of justice.

Over the past decade, ECCHR and Forensic Architecture have cooperated on exposing human rights crimes worldwide, such as working conditions in Pakistan, torture in Syria, and Spanish push-backs in Melilla.

Investigative Commons hosted an exhibition at Haus der Kulturen der Welt in Berlin in June-August 2021 and plans a conference on 9 October 2021 at the same location. 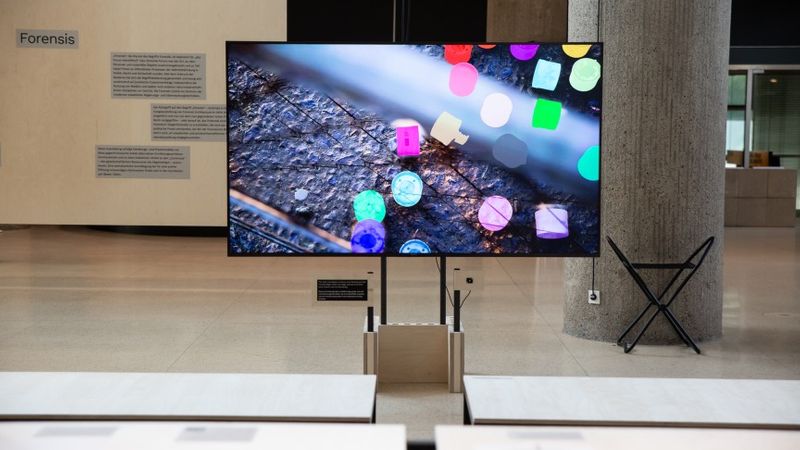 
*Anne Schroeter holds a LLM in international law from Glasgow University and a BA in political science from Universität Potsdam with a minor in public law. She has worked with Case Matrix Network, Syrian Archive and other NGOs in analytical and legal positions on accountability for international crimes, evidentiary analysis and transitional justice. Between 2018 and 2019 she worked with the Syria team in the International Crimes and Accountability program of the European Center for Constitutional and Human Rights (ECCHR). She has been the coordinator of ECCHR’s Investigative Commons project since July 2020.