“Is there a link between your local river drying up and European policies on climate and energy? Do you know which international energy companies are active in your country or region and what their track record on environmental protection is?” (Jelena Prtorić) The Arena Climate Network is an initiative that aims to promote and support “a cross-border mindset when investigating climate issues and develop the tools that would enable journalists, researchers and concerned citizens to collaborate across borders on climate stories.”

This article provides a snapshot from Jelena Prtorić's talk "A Climate of Collaboration: My climate issue is your climate issue" at the Investigation is Collaboration conference organised by Exposing the Invisible Project on 2-6 August 2021.

In 2019, investigative journalist Jelena Prtorić saw this photo of the construction of a liquified natural gas terminal on the northern tip of the Croatian island of Krk in the Adriatic Sea. 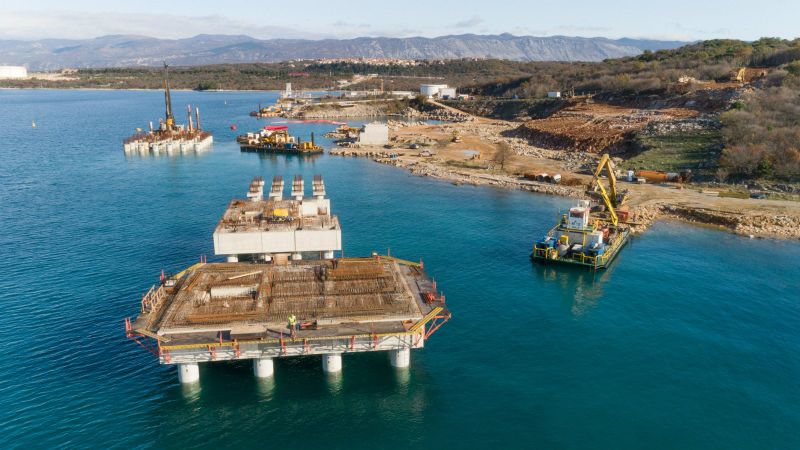 Image: “The site of a new LNG terminal on the northern tip of the Croatian island of Krk.” Photo credit: BIRN / downloaded from: https://balkaninsight.com/2020/01/17/energy-independence-critics-turn-up-heat-on-croatian-lng-plan/

The government called the project a game changer, something to help Croatia achieve energy independence over previous reliance on Russian oil and gas.

But she was skeptical. As she dug into the story and interviewed dozens of people, she began to paint a picture countering the official narrative. Environmentalists and locals warned of marine life destruction. Energy experts said the project didn’t make sense, and economists doubted its fiscal viability.

Jelena Prtorić published the story, “Energy Independence: Critics Turn Up Heat on Croatian LNG Plan,” but she felt as though she could have done so much more. - “It would have been very helpful to me to have had a cross-border perspective.”

Jelena knew there were several European and even global angles to explore, given the interconnected nature of climate and energy policy, but at the time she lacked the network and resources to explore them. She simply did not know where to find a community of these experts, local journalists, and others conducting impactful climate investigations.

“What I needed was a network,” she remembers. “Stories don’t stop at borders, journalism shouldn’t either.”

A while after, working with Arena for Journalism in Europe - a foundation with the mission to support collaborative cross-border investigative journalism - Jelena saw an opportunity in laying the foundations of a collaborative community focused on climate related investigations, support and knowledge sharing among reporters. Since early 2021 she has been developing and coordinating the Arena Climate Network, a community of journalists and researchers working on climate-related topics, based on the principle of networking and the idea that every story is cross-border. She envisions a network that is topical, cross-border and community-led. With colleagues and collaborators, the Network has launched discussion groups, a twitter account (@Arena__Climate), and plans to create secure collaborative spaces and provide training for climate investigations.

Like all great collaborations, Arena Climate Network is a work in progress, and Jelena Prtorić is transparent about both the challenges and opportunities ahead.

Opportunities that such a network will bring:

And, most importantly, “having a community also keeps us sane!” says Jelena Prtorić.


*Jelena Prtorić is a freelance journalist who has reported for a wide variety of publications in English, French, Italian, and her native Croatian. Her work has focused mainly on gender and human rights, migration, the environment and climate, culture and social movements. She also works with non-profit Arena for Journalism in Europe as the coordinator of the Arena Climate Network and its Climate Network Forum. She is an occasional podcaster and translator of graphic novels.